Baltimore (CNN)After a day of jubilation following charges against six Baltimore police officers in the death of Freddie Gray, protesters cleared the streets early Saturday to observe a curfew.

A few protesters scuffled with police after 10 p.m., when the curfew went into effect.

Authorities used a megaphone from a helicopter to warn protesters to go home or get arrested. Police detained 53 people late Friday, including 15 who violated curfew.

By midnight, the streets were deserted as a hush washed over, a far cry from the boisterous honking, weeping and cheers earlier when the city’s top prosecutor announced charges.

The 25-year-old died after suffering “a severe and critical neck injury” while being transported “handcuffed, shackled by his feet and unrestrained” inside a police van, she said. It is against police policy to transport a prisoner without proper restraints such as a seat belt.

The police union called for an independent prosecutor, saying Mosby has conflicts of interests. They also criticized her for not waiting until police were done with their inquiry.

“Let me begin by stating how appalled and frustrated we are at this morning’s events. …. We are disappointed in the apparent rush to judgment given the fact that the investigation into this matter has not been concluded,” said Gene Ryan, president of the police union. “Our officers, like every other American, are entitled to due process.”

The Baltimore Fraternal Order of Police said the officers did nothing wrong.

“No officer injured Mr. Gray, caused harm to Mr. Gray, and they are truly saddened by his death,” said Michael Davey, an attorney for the union.

The officers face various charges that could lead to decades in prison.

Second-degree depraved-heart murder is punishable by up to 30 years in prison.

Gray’s relatives said they are satisfied with the charges announced.

“These charges are an important step in getting justice for Freddie,” said his stepfather, Richard Shipley.

The six have a preliminary hearing on May 27.

Mayor Stephanie Rawlings-Blake called for the immediate suspension of all the officers facing charges.

Police officers arrested Gray on April 12. He slipped into a coma after suffering a series of injuries and died a week later.

Mosby said the incident began when two police officers on bike patrol “made eye contact” with Gray, who then ran.

When officers caught up to him, he surrendered and was placed on the ground, arms handcuffed behind his back. He said he couldn’t breathe and asked for an inhaler, but he did not get it, according to Mosby.

Although police found a knife in Gray’s pants, it was a variety allowed by Maryland law, and police had no reason to detain him, the prosecutor said.

Still, they called for a police transport van and loaded Gray, in handcuffs, into the van. They did not put a seat belt on him, Mosby said. 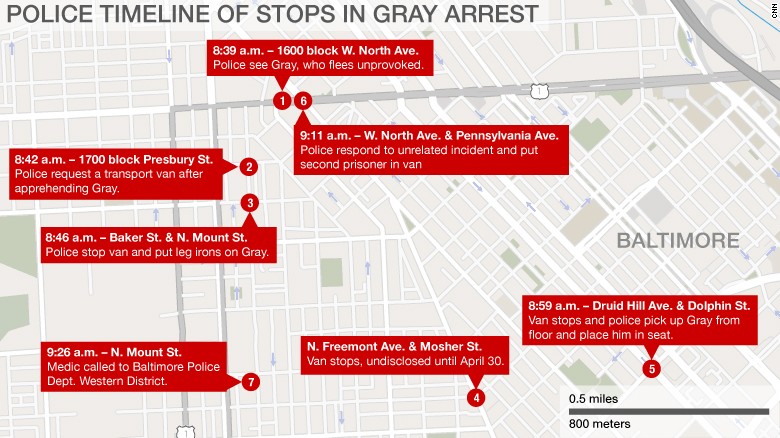 Goodson stopped the vehicle four times over the course of the approximately 40-minute ride to the police station. At the first stop, officers took Gray out, put shackles on his ankles and placed him — still handcuffed — headfirst and on his stomach in the back.

At the last stop, Goodson picked up another man who was put in the back of the van on the other side of the partition that keeps prisoners separated.

Mosby said the officers were “grossly negligent” for failing to get Gray medical help, despite his requests, until arrival at the Western District Police Station.

By then, he was no longer breathing, she said.

Gray was rushed to a hospital, where he underwent surgery.

He died a week later.